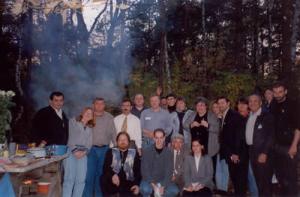 Mission is not completed yet

18th meting of the Centers for Pluralism will take place in Baku in a few days. Just the persons organizing this measure could know how it is difficult and responsible to organize such a measure. Because we have to meet our old friends. We wish to conduct this measure better than 9th Meeting being held in  Baku in 1997. The Meeting which is of great significance made us to be prepared for a great sense of responsibility. Because we will celebrate at this Meeting 10th anniversary of the Network.

Yes, we will celebrate 10 years of our Network at the coast of the Caspian Sea. Of course, it is a great historical event, historical date: Network, whose member I am, is coeval with independence of our native country…

… Today I am the citizen of the state, that at the end of 80es raised for nation wide struggle for being independent from Russia, and at last rehabilitated its independence.

…Today I am as well member of the Network which provides support to rehabilitation of the societies materially and morally being ruined by communism.

I must dealt with organization of the 18th meeting coinciding with the Network’s 10th anniversary. We will meet the friends again. We will speak about the problems, news, success, failure, joint activity, cooperation, authoritarian state heads, democracy situation and etc. I’ll get to know from Milyenko the reason of Zoran Jinjik assassination, new “reforms” of Lukashenko from Vincuk. Petrushka will ask me: “Will Aliyev be elected to presidenship once more this year?!”.

…No! We have to be prepared for this Meeting very seriously. Because it’s a kind of the Meeting where we will give the report. We, the persons who celebrated 10th anniversary of state independence must make a speech at the Network’s 10th anniversary and stress what we have done during these 10 years, which success we have gained, what kind of difficulties we have and why?

And at last at the Meeting there must be responded to 2 questions:

It is very important for me to pay attention to the last ten years of Azerbaijan while responding to these 2 questions. If I draw parallels between 10 aged INDEPENDENCE and 10 aged PLURALISM CENTERS NETWORK I would be mistaken at all. Of course, Azerbaijan is an independent country and during these years Azerbaijan’s independence is strengthened else. Hundred thousands people who were going into streets obtained one out of two things “freedom”. The second thing that these persons wish to achieve is democracy and the struggle for democracy has not been completed yet. One might ask it has nothing to do with the Network? My reply is very short: “It is related directly”.

There must be held a comparison between definite periods while speaking about the influence of the Pluralism Centers to democratization process in Azerbaijan. In 1995 when the PluralismCenter was founded just a few persons in the country knew the essence of the words: the third sector, civic society, NGO. Just at this period of time the Center for Pluralism “Inam” began its activity among public activists, initiative groups. PluralismCenter Network was as a force possessing incomparable opportunity for the spread of democratic ideas in the country. Just in the framework of the Network there have been implemented numerous programs. Hundreds of politicians, public activists for the first time made visits to democratic countries and gained experience. Hundreds of democrats arrived in Azerbaijan to get exchange of experience or observe the elections. Today establishment of tens of active NGOs and expansion of their activity is a result of the programs implemented by “Inam” and the Network. The Center for Pluralism INAM together with its numerous friend organizations is actively participating at the process of civic society formation in the country.

I remember of our publishing the news at the country media on the eve of 9th Meeting of the Network that took place in Baku, in 1997. The visit of about 50 well known democrats of the world to Azerbaijan including Ms.Petrescu – adviser on NGOs issues of the Romanian president were among the news. I was rang up from presidential apparatus after 5 days of the news publication in the newspaper. The ringer introduced himself as the chief of the department on NGOs issues at presidential apparatus and expressed his wish to meet with Ms.Petrescu To my question “Do we have such a department?” he responded “Yes, it was founded two days ago”. It was the period when members of the Parliament were calling NGO as an anti-state organizations.

The Network realized irreplaceable works and created great opportunities for formation and development of cooperation links between political parties together with public organizations. There were created cooperation links with “Rukh” of Ukraine and other pro-democratic parties, Popular Front of Beylorussia, Republicans of Georgia and its allies, Musavat Party of Azerbaijan and its allies (a number of political parties and politicians could be added to this list).

While speaking about the implemented works and Network importance, in any case this question should be responded:

“IN WHAT IS SEEN THE NETWORK’S FORCE?”

Network’s force first of all is the people gathered there. Here are gathered expedient people knowing very well for what they are trying. They are constantly learning and ready to pass to others their experience. Network members and persons whom they are cooperating with believe that joint activity and cooperation in building democratic society in the countries could be resulted in success. Pluralism Centers Network is a wide coalition of the persons wishing to build the society with equal right citizens, supremacy of the law, society where could be acted freely, society with reliable power being elected by them, their families, with happy welfare, society without any danger and obstacle for development.

To join this union, to enter its row is very easy. Basic term for it is sincere attitude. If you are sincere you will be given what you are wishing, you will be provided every support.  Here you can talk for hours and days with persons who struggled against communism, persons were kept under arrest in prison camps, participated at democratic state construction, held democratic reforms or persons preparing for democratic power. It could be said that all of these persons have contributed with their activities to the sphere of human rights protection. They could be called patriots, fanatics of democracy and human rights.

This year is the 8th year of our membership to thus network. I obtained numerous new members-friends during this period. At the same time I was witness of the persons who voluntarily strayed from the network for the reason of not being able to follow the simplest term. People having no principles and convictions can not stay here for a long time because here is not productive condition for such kind of persons.

Let’s try to respond to the second question:

SHOULD THE NETWORK CONTINUE ACTIVITY OR IT HAS ALREADY COMPLETED IT?

I will try to respond this question from the point of Azerbaijan reality. As I noticed Azeri people achieved its wish, it is an independent state. And I accept the principle of non-existence of national freedom where does not exist individual freedom. Nowadays, Azerbaijan is in the list of the countries needing assistance in the sphere of democracy, human rights and freedoms, in most part of the countries that are members of the Network, free elections have not been conducted yet, legitimate power has not formed yet, economic-social reforms have not been held yet, people’s rights and freedoms are still being violated. In some of these countries prevails half-democracy, in others – dictatorship. Here are existing democratic centers struggling with authoritarian regimes and such Networks are of great importance in coordination of their activities.

Pluralism Centers program is one of the most successful programs implemented by the US institutions in new independent countries. It is differentiated with its uniqueness. First of all it should be measured by Network’s opportunity to influence to member countries socio-political life. With its activity the Network forms ground for mutual cooperation not only of public organizations, but also of political parties and unions. Work quality here is treated very seriously. It would be enough to pay attention to election observation issue in order to see clearly the difference of the Network’s mobile work principle from other international organizations activity. Only 35 members of the Network discovered over 500 election falsification cases  of 35 type during 2000 parliamentary elections in Azerbaijan and these facts later on have been included into reports of many international organizations.

One of my colleagues who got closely acquainted with Pluralism Centers program of IDEE called this program a small variant of famous Marshall program. I share this thought and say just  the following to the opponents: “Our mission is DEMOCRATIC INDEPENDENT society: We are already independent but the struggle for democracy is still going on. Our mission is not completed, sirs!”.